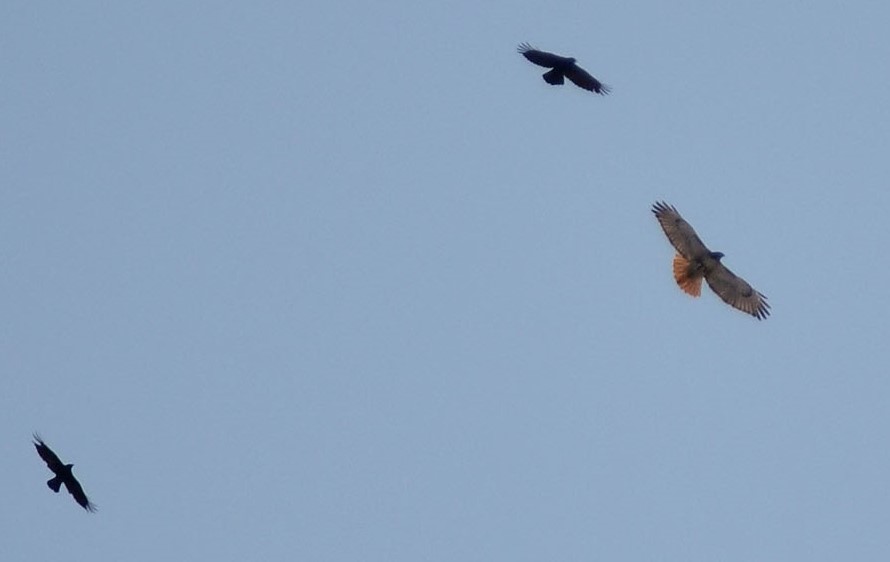 The common American crow makes many sounds. One which informs you that a crow is upset is quite distinctive.

One summer afternoon, my wife and I heard that sharp and loud noise in the sky right above us. Two agitated crows were chasing a hawk.

Now this might not seem like a story worth telling if it was not for the demeanor of the birds involved. I witnessed a one-sided confrontation!

The crows flew swiftly towards the hawk like they wanted to attack it, but at the last second the smaller crow would turn away, maybe leery of direct physical confrontation. They squawked loudly and continued to fly at the hawk with aborted attacks.

The hawk, however, soared with the wind, seemingly floating while ignoring the crows. We watched in fascination. The hawk moved with the wind, never once flapping its wings. Meanwhile, the crows were working hard to follow and keep up with the hawk as it meandered up and down, left and right. (It seemed like the hawk never looked at the crows, but that is a detail I likely imagined.) The one-sided chase and noise fest continued for about 5 minutes with the crows expending lots of energy. Then one crow flew off still screeching, likely tired of the chase. In another minute the second crow veered away still loudly complaining.

Maybe the hawk poached an egg or killed a fellow crow? Whatever it did to incur the wrath of these two crows, that hawk seemed unconcerned. That is life in the bird kingdom.

I saw a lesson in this real-life “Angry Birds” scenario, and it had to do with emerging and experienced leaders.

Every leader will be criticized! That is life on the leadership realm.

You gain vital experience when it happens and how you respond is an opportunity to practice leading from the High Road®.

When an employee criticizes you, it is rarely direct. Like the crows, they want to avoid direct confrontation with you. So, they talk about you when you are not in the room. That an employee is upset with your action, decision, or choice you may find out later or maybe never. Should you uncover this criticism, it is natural to feel the need to defend yourself, argue, and find fault with the criticizer.

Doing this ‘fighting fire with fire’ low road approach is unproductive and NEVER leads to a resolution.

As you learn to lead, you will make mistakes and do things that cause employees to feel anger towards you. Strive to be like the hawk and do not let criticism distract you from leading and influencing. There is a difference between being aloof and staying calm. Work always on being calm and staying on task. Like the crows, the angry employee will vent for a while and then lose interest.

There are creative and beneficial ways that you can discern when employees are upset about your leadership. And there are ways to convert criticizers into supported.

These topics will be covered at other time.